When it comes to football, in our family there are two very clear divisions. In one corner, there’s  Man of the House, who has been an Everton supporter ever since he arrived in the UK from New Zealand over 20 years ago because so many of his English friends supported them. And in the other corner, there’s me and No 1 Son, both Chelsea supporters. Our local team.

Of course, discovering his son supported a different team, despite his best efforts to encourage him to think otherwise, was a bit of a shock to Man of the House but he’s always taken it in his stride.

Or so I thought.

One day when No 1 Son was about 11, Man of the House rang me at work. ‘I’ve got some exciting news,’ he said. He told me No 1 Son had been picked to be a child mascot for the Chelsea v Everton game the following week at Stamford Bridge.

Of course I was thrilled – although I worried about the match being on a school night, and I hadn’t even realised No 1 Son was on the waiting list. Still it was the chance for my son to meet his then heroes – John Terry and Frank Lampard and the rest of the team – and run out onto that pitch.

Then Man of the House dropped the bombshell. ‘Not a mascot for CHELSEA,’ he said. ‘He’s going to be a mascot for EVERTON.’

No 1 Son, bless him, knew that it would make his dad incredibly proud to see his only child on the pitch in the company of David Weir and co, and at least it meant he would get to see his heroes in the flesh, even if he was dressed in the wrong team’s strip. (And he got to shake hands with the Chelsea captain, of course. ‘John Terry has very soft hands,’ he said afterwards. We still laugh about that one now.) He did us all proud that night. I was watching the game on TV, and seeing my son’s face on BBC1 as he stood in the tunnel at Stamford Bridge, then watching him run out onto that pitch and kick the ball was just incredible. Bearing in mind this was a kid who didn’t make it onto the school football team, it was quite a moment. Needless to say Man of the House was over the moon. And that’s how my son became a child mascot, for his dad’s favourite football team. *This is my entry to the Gallery – the theme this week is ‘dads’. 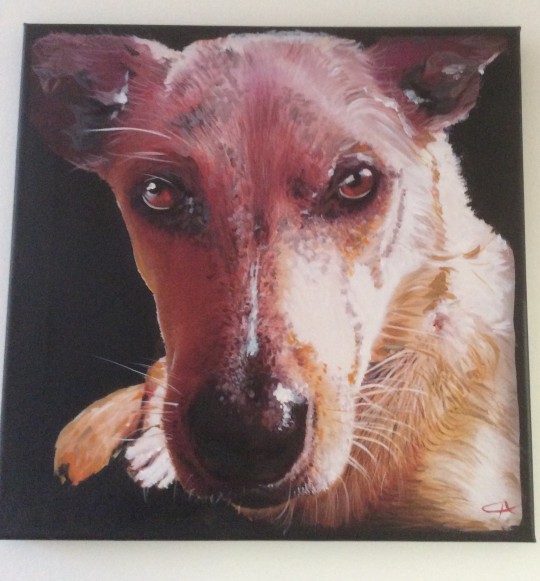 The One with the dog portrait

An easy way to carry your holiday money